Almanor Lakeside Ranch is an opportunity to pick and choose from a multiple of land use options. There are currently 18 APN#’s for the project, allowing flexibility to develop a wide array of mixed-use products.

TIMBER HARVEST
A timber harvest contract with Collins Pine is expected to net up to $2,000,000. Future sustainable harvests can be conducted approximately every 10 years.

PREMIUM LAKE VIEW HOMES
Lake Almanor is experiencing historically low inventory in all phases of residential properties. This makes the 44 front-row lakeview homesites quite attractive (see tentative map). With similarly situated 2,500 sqft. homes fetching $1.2 – $1.3 Million, such a development should be able to generate north of $10 Million. This also does not take into consideration the additional premium homes that can be built by expanding on this same infrastructure (see map).

RECREATIONAL VEHICLE AND BOAT STORAGE
There is an incredible lack of storage opportunities for motorhomes, R.V.’s, boats and snowmobiles in the Almanor Basin, and most specifically, the Lake Almanor Peninsula. A nearby facility is evaluated at approximately $3.2M based upon occupancy and rent rolls. Locating a 100,000 sqft. facility on this property would be well worth investigating. The location would have close proximity to water access. The estimated cost to build such a facility is approximately $120 – $150 per sqft.

HOTEL AND SPA
A 14-acre site has been approved for 150 room Hotel/Spa. The demand for high- end lodging is extreme, with nightly rates reaching $400/room. Making this opportunity even more interesting is that the Plumas County General Plan greatly restricts the possibilities for meeting this demand. Such a hotel could be tied in with the approved 258-acre golf course or a “Glamping” compound.

GLAMPING – R.V. PARK, CAMPGROUND, TENT SITES, OR A BOUTIQUE HOTEL
The north end of the development is ideal for an expansive project featuring the above possibilities. The pandemic-driven, outdoor recreational adventure, is a hot opportunity in today’s development world. The Lake Almanor area has witnessed nearly 100% occupancy for campgrounds and R.V. parks. A development similar to the Costonoa Lodge and Resort in Pescadero California appears ideal. On-site hiking, mountain biking, pickleball, children’s activities, equestrian facilities and mixed-use lodging would be a welcome addition to the area.

WORKFORCE HOUSING
In March of 2022, the South Lake Tahoe region received a $19.6M grant from the California Department of Housing and Community Development for workforce housing. The current housing scarcity in the Almanor Basin has caused a severe shortage of available opportunities for affordable housing similar to the Tahoe region. This grant-funded 248-unit project in South Lake Tahoe will consist of studios all the way up to three-bedroom apartments. Average workforce monthly rents in the area range between $1,000-$1,500.

The land uses possibilities are not limited to those listed above. For example, the property would be well suited for establishing a conservatorship for tax credits, building a family compound or creating a corporate retreat.

The following table describes the component land uses, and their maximum proposed density or intensity of development under this Planned Development Application. The design concept is to create a diversity of residential neighborhoods in terms of design, density, and affordability, to supplement the economic base for visitor-serving uses, protect the site’s unique environmental resources, and provide complimentary commercial and recreational uses. The project also proposes advanced water and wastewater treatment and recycling systems, and land has been set aside for such public facilities. A golf course will be constructed in the southern area and will be irrigated with recycled water, meeting Title 22 standards as such water becomes available.

Ten residential neighborhoods or Land Use Areas (LUA) are proposed at a maximum of 20 dwelling units per acre to less than 1 unit per acre. The average net residential density is approximately 2.5. LUA 9, in the southern area, is shown in greater detail. A preliminary lot layout for this custom lot neighborhood is shown because it is integral to the routing of the proposed golf course. 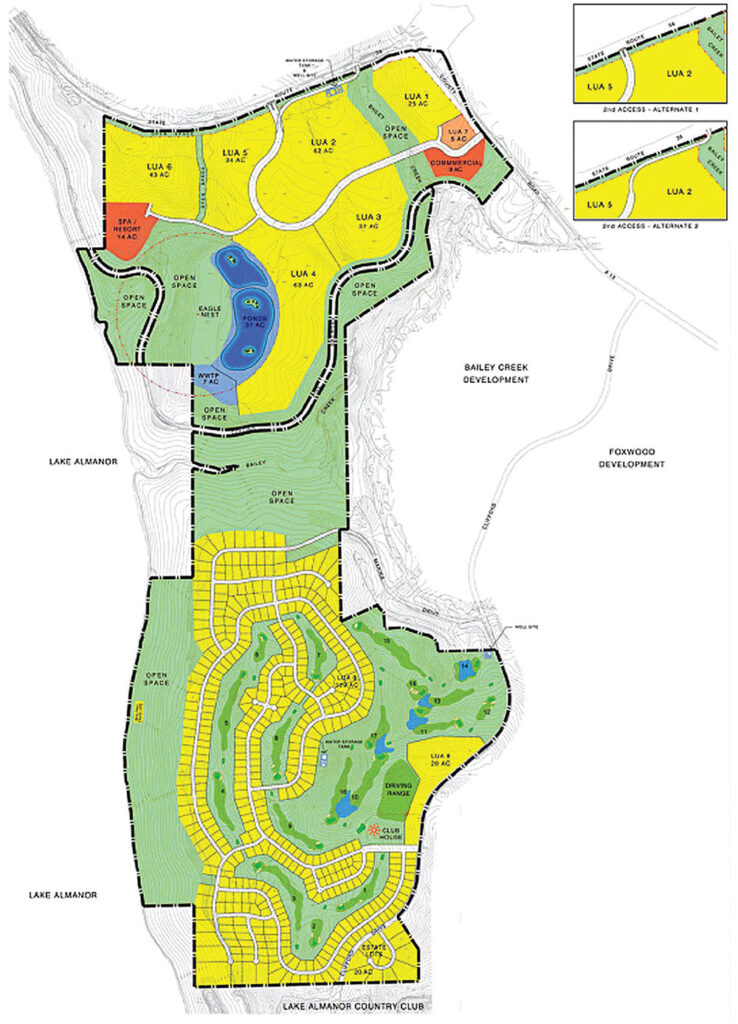 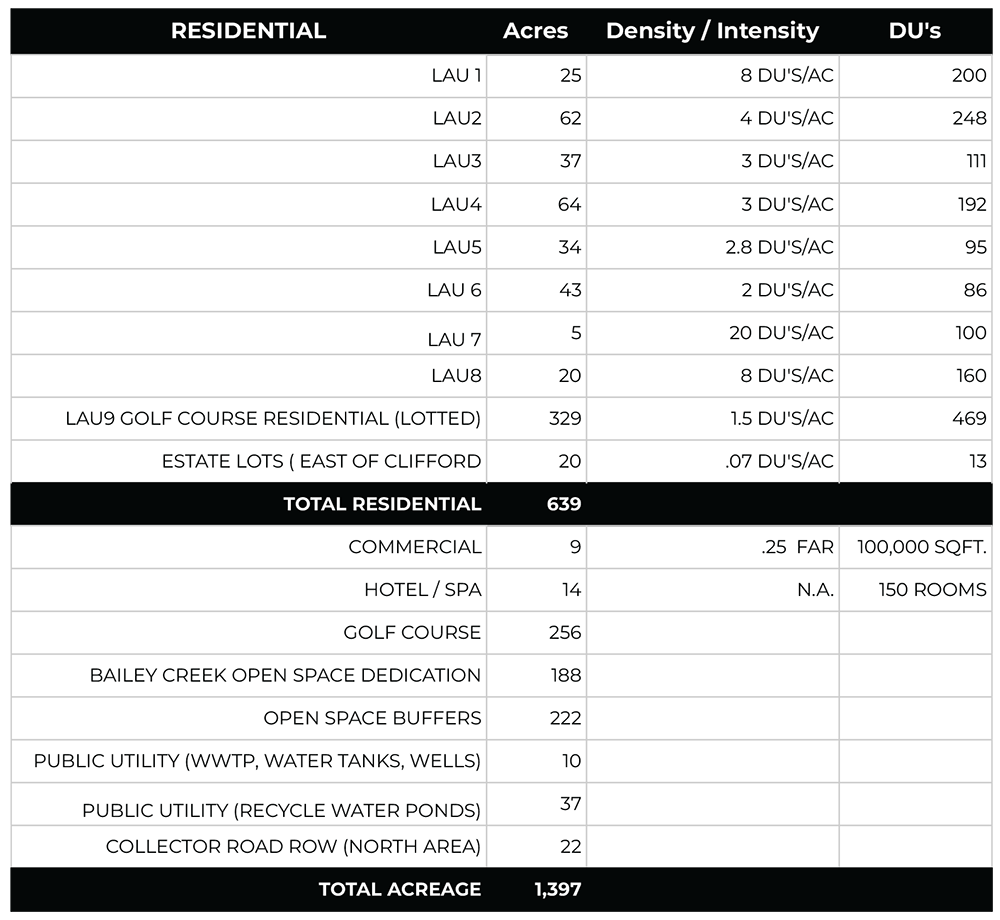 LUA 1  |  25 Acres  |  8 Units/Acre
LUA 1 is located close to the intersection of SR36 and A-13 west of Bailey Creek. Average slopes are mostly 0-10% and it is within walking distance of the proposed commercial area. Patio homes, “zero lot line” detached single-family homes, duplexes and or other forms of lower density attached housing are proposed up to a maximum density of 8 units/acre. It is intended that this neighborhood, together with the adjacent LUA 7, will provide the ability to develop affordable housing to meet the increasing demand for lower-cost housing in the Almanor Basin.

LUA 2  |  62 Acres  |  4 Units/Acre
LUA 2 is located east of Bailey Creek adjacent to Highway 36 on the flattest portion of the entire site. It is proposed for higher-density single-family detached production or custom housing on padded lots. LUA 2 is accessed by a looping collector limited access roadway (no direct driveway access). This roadway will connect A-13 either to SR 36 at a point meeting CAL TRANS encroachment standards, or connect to the northern portion of the A-l3/SR36 intersection via the existing State Highway under crossing at Bailey Creek.

LUA 4  |  64 Acres  |  3 Units/Acre
This neighborhood is very similar to LUA 3 in slope, the fact that much of the forest canopy has been previously logged, and in its proximity to the rail line. On the west side, LUA 4 is artificially constrained by the 1/4 mile buffer provided for the existing Bald Eagle nest site. This neighborhood is proposed to be developed as single family detached production or custom housing on padded lots. No portion of the residential lots will encroach upon the proposed buffer.

LUA 5  |  34 Acres  |  2.8 Units/Acre
This neighborhood has a west-facing aspect with slopes between 0 and 20%. It is proposed as custom or production housing but with no mass grading of lots. As a result, slightly lower densities are anticipated.

LUA 6  |  43 Acres  |  2 Units/Acre
This neighborhood contains substantial lake views but is characterized by more varied terrain. It is intended as a custom lot neighborhood, without mass grading at densities not to exceed 2 units per acre. The neighborhood shares access with the proposed hotel/spa but will be internally connected to LUA 5.

LUA 7  |  5 Acres  |  20 Units/Acre
LUA 7 is at the entrance to the northern part of the project opposite the proposed commercial area. It is intended to be developed as multi-family housing either as apartments, condominiums, townhouses, or similar high-density residential uses. It is the only multi-family area proposed and its terrain and location are uniquely situated to accommodate the proposed use.

LUA 8  |  20 Acres  |  3 Units/Acre
LUA 8 is adjacent to Clifford Drive in the southern part of the project. It is intended to be developed with two points of access, one on Clifford Drive and one next to the proposed Club House near the main entrance to the southern development area. LUA 8 is intimately linked to the golf course with views of the entire back nine holes. The housing may be developed as condominiums, townhouses, or similar attached or detached units. Some units may be made available for limited stay occupancy by visitors or golfers.

LUA 9  |  34 Acres  |  2.8 Units/Acre
This neighborhood has a west-facing aspect with slopes between 0 and 20%. It is proposed as custom or production housing but with no mass grading of lots. As a result, slightly lower densities are anticipated.

ESTATE LOT AREA  |  20 Acres  |  .7 Units/Acre
This small neighborhood is disconnected from the rest of the project and lies on the east side of Clifford Drive. It will be developed as individual custom lots averaging over 1 acre but will be served by project water and wastewater systems through utility extensions across Clifford Drive.

Commercial area  |  9 Acres  |  floor area ratio .25
The 9-acre commercial site provided at the entrance to the northern part of the project is adjacent to the old Collins Pine rail line and is intended to meet the need for neighborhood retail, office and visitor-serving demand. Proposed uses are those provided for in the Plumas County C-3, Convenience Commercial Zone. The site is proposed to be developed in accordance with the County requirements for such use, in addition to any conditions that may be established under this Planned Development permit. Should the County or other entity develop the rail line for transit, excursion, trail, or other purposes, the commercial site may be designed and developed in a manner so that any such use of the rail line shall be complemented. This may include the development of trail stops or transit stations as may be planned.

Buffers and Other Open Space Uses  |  410 Acres
Substantial land is shown as open space in the site plan. This includes the Bailey Creek corridor, the entire frontage along the lake, land adjacent to the rail line and land within one-quarter mile from the existing bald eagle nest site to be protected from residential or other intense human activities. The ultimate ownership and management of such open space parcels will be determined over time. Ownership and/or development rights may be conveyed to public agencies that have trustee responsibilities for certain public resources, non-profit organizations, or land trusts who may accept management or ownership responsibility, or may be retained and managed as common open space by a private entity such as a homeowners association.

Public Utility Uses
Lands shown in the Site Plan for water or wastewater systems are described in more detail in the technical reports provided as separate sections of this Planned Development Application. 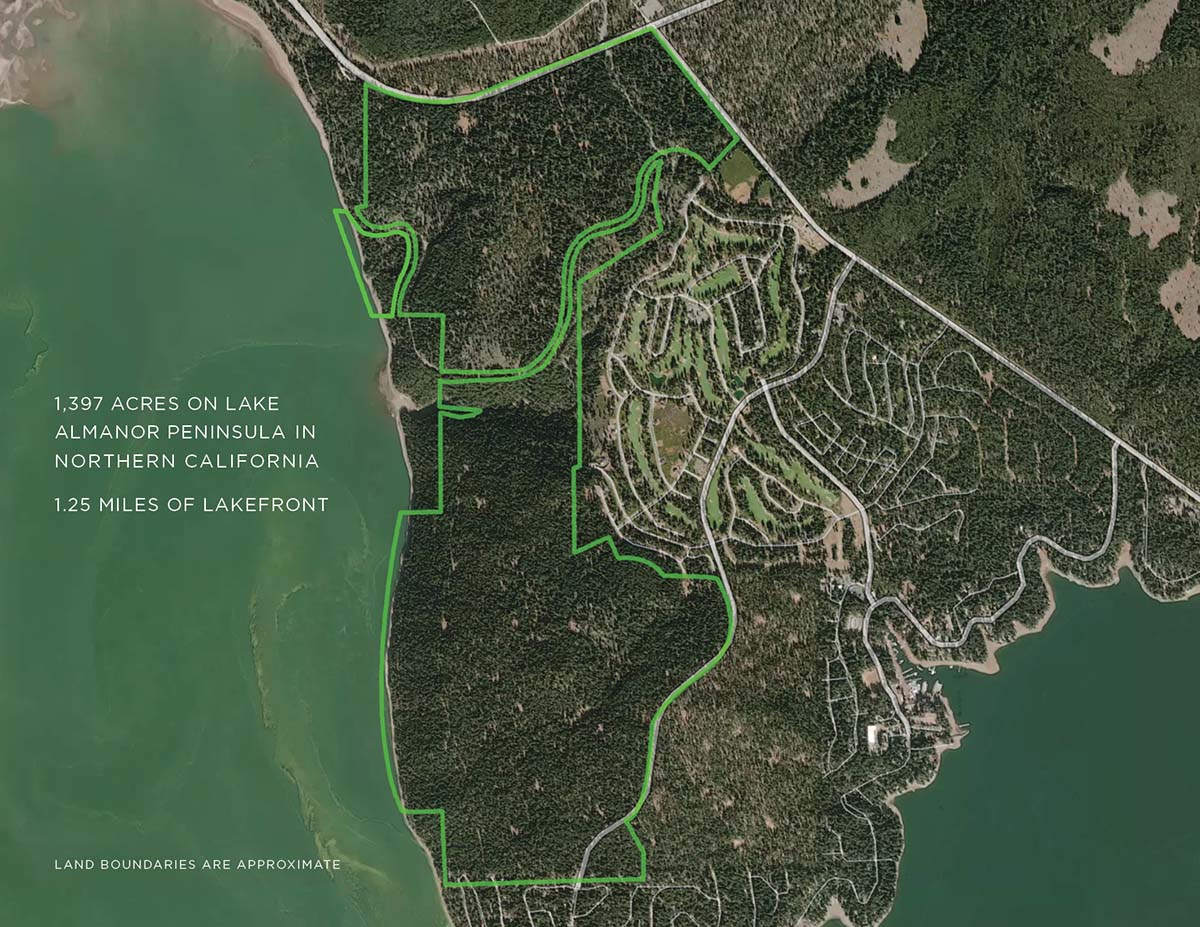